On Saturday, Host Mom Sylvia took us to her friend's tea shop to drink tea in the traditional way. Sylvia has been taking a tea preparation class for over a year, and wanted us to taste the true traditional tea. And taste we did-- I had some caffeine issues after 12 cups!
Posted by Scott & Ellen Enebo at 8:19 AM No comments: 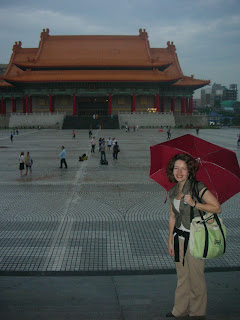 Today I left Taipei to join the cast in Taichung for my last week in Taiwan. Its hard when you are working in a city, versus being there on vacation... as I rode the train south I realized how many things in Taipei I didn't get to see!
But it was good to live the life of the local-- I will miss the efficiency and independence of the MRT, the bakeries with the chocolate pastries full of flavored cream, the crazy springtime weather where I need a sweater and an umbrella at all times, even though it could also be 85 degrees!
I will miss texting all the students I met at universities, though I will not miss my sticky phone buttons that made my thumbs work overtime on literally hundreds of text messages.

I will miss hanging out and planning my schedule with Sofie- we had the rare independence of the five days away from the cast, interviewing and giving presentations all over Taipei. It was a joy to work with her, and with our fab advance team support: shout out to Johan and Sean!

So as evidence that I did actually see a few sites, here is me on the rainy day that the cast visited Chiang Kai-Shek Memorial Hall. Behind me is I think the National Theatre building.

I have one more week of adventures in Taiwan before heading back to Minnesota on May 3. Its hard to believe its going so fast.
Posted by Scott & Ellen Enebo at 7:32 AM No comments: 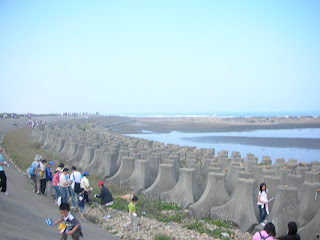 When your host family day, and only day off in the next two weeks, starts by needing to be in the car with hostmom at 6:45am, you know your life is not your own!

Yui and my hostmom, Sylvia, is a member of a nature club called Society of Wilderness. As today was the big Earth Day Celebration, her club was helping organize a shoreline clean-up along the Taiwan Straight. Yui and I came along. We weren't much help with the organizing part, since we couldn't speak to anyone, and Yui could only read the parts of signs/ characters that are similar to Japanese, but we had a great time in the sunshine, picking up trash along the breakers.

The coast of the Taiwan Straight near Taichung is very rocky, and at this time, very shallow for a long ways out. But there are huge cement breakers, and canal channels to help control flooding during typhoon season, and a lot of trash that washes up in this area. We had tongs and two kinds of gloves and hats and buckets and trash bags, and participated in the most organized beach cleanup I've ever attended. There were even "documenters" wearing arm bands and walking around with clipboards. They were looking at the trash we found and recording the different types.

I've also never seen a society so integrated and active in their recycling programs. Every meal we sort our trash into food scraps, cardboard, plastic, and chopsticks. This is in fast food restaurants, at the MRT, and for the cast on our own, as whatever building we are eating in also requires this sorting system to pick up our trash. There are huge campaigns to use reusable chopsticks, and many people have collapsible sets they carry in their bags/ purses. For our earth day lunch today, everyone at the event brought dishes from home to eat out of, and there was no trash from the event besides the watermelon rinds.

It was a humid, warm sunny day, and really lovely to be near the water. Then we came home for a nap and went to dinner with the boys- we had a dinner that sounds something like yahm-cha in JApanese. Its basically Chinese tapas-- bitesize snacks, spring rolls, fried pork, coconut jello bites, lots of fun and some unidentifiable things. Its a show day tomorrow, so I'm going to get to bed early.
Posted by Scott & Ellen Enebo at 6:32 AM No comments: 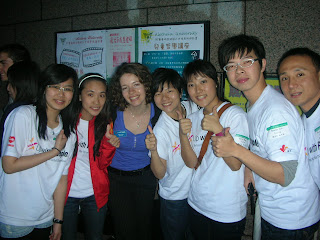 I have met a LOT of Taiwanese youth in my work as admissions support. As a result, I am on more cell-phone wallpapers than I have ever been in my entire life. This is such a photo-taking culture. And every person needs their own photo with you- individual poses. Some of the girls came to our mini-shows, and then to our big show both nights, and I've taken photos with each of them individually at least five times.

The incredible part is, they have turned the photos into beautiful gifts for the cast. There was a group of girls from the business college we are working with that made two huge poster-sized collages of all the photos they took of them with cast members, as enormous thank you cards. I also received a lot of individual prints from girls who wrote their emails and facebook name on them for me. They were so welcoming and so excited, and at times more than a little overwhelming. For some of the guys it was almost scary- we called it the boy band effect. I even got to reprise my role as a bodyguard, which I haven't done since working for Camp Snoopy! You can imagine the hilarity of the situation- me, hardly five feet and eye-to-eye with Taiwanese teenage girls, telling them to back up as the All-American handsome guys on my team need a bit of breathing room!

Even for adults there is a photo-happy culture; every high profile meeting ends with a group photo in front of the company sign or in the University president's office.

Its a novelty that sometimes is fun, but other times gets tiring. I have never had my picture taken so much, not even on my wedding day.
Posted by Scott & Ellen Enebo at 5:51 AM No comments:

Today was the cast's big move from Taipei south to Taichung, for our second and last Taiwan city. I am staying with the Cheng family, Sylvia and Jung-Shi, and their twin sons who are eight: Joey and Roy. Of course, except for Jung-Shi, these are their English names, and not their "real" given names.

Jung-Shi said to me as we sat down to dinner, "You need to make a wish?" and he folded his hands to demonstrate to me that he meant if I need to pray before the meal. I love interpretation translations like this.
Posted by Scott & Ellen Enebo at 5:42 AM No comments: 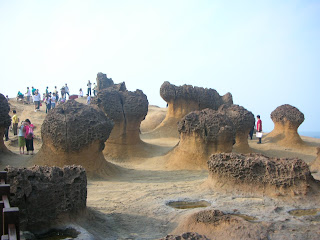 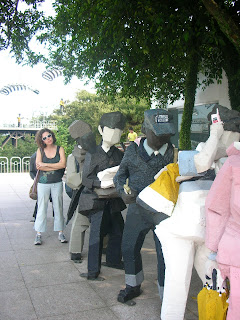 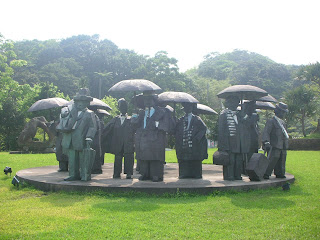 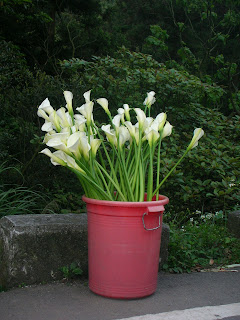 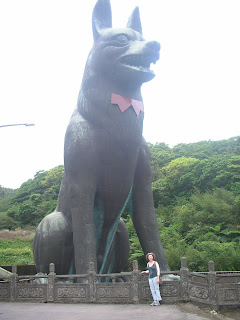 There's nothing quite like host family day... a chance to catch up on sleep, do laundry, and of course, be up for whatever adventure your host family has in store!

I am very lucky to be hosted with an UWP alumna named Paige here in Taipei. She is Canadian and has been living here for about three years. We had a really lovely day exploring the northern tip of the island.

We drove north out of Taipei and around the most northern point, stopping at a surfing beach, and at a beautiful lookout where we sat outside at a cafe, reading books and listening to the waves. There was a lone fisherman on the rocks below us, and it was a peaceful and gorgeous, if hazy, morning.

We stopped by a bizarre temple up in the mountains where there is a 12-story monument of a dog. Apparently a merchant ship sank offshore and the 18 sailors drowned. The dog attempted to rescue them, and when he was unsuccessful, he sat on the shore and waited for his owner for the rest of his life. The temple is dedicated to the sailors and of course, the dog.

We visited Ju Ming sculpture park and museum, which houses the art of Taiwan's most famous contemporary artist, Ju Ming. His chunky people sculptures were my favorite. The grounds were gorgeous and we enjoyed being outside.

We also stopped by Yehliu Geopark which is a skinny peninsula that has striking rock formations that have been shaped by the ocean crashing over the most northern part of the island.

We drove over the mountain back to Taipei, where we could see fields of calla lilies in full bloom. There were roadside stands and tons of people, as the Festival of the Calla Lily is the full month of April.

We stopped at one of Paige's favorite restaurants, which is named Stone House but everyone just calls it "Jesse's", and ate in the garden. We had kung pao chicken, fried tofu, a shrimp & pineapple dish, and steamed sweet potato leaves. Guava, pineapple, and wax apples for dessert.

It was a full day, but in a relaxing way, which is lucky, as there's another busy week ahead!
Posted by Scott & Ellen Enebo at 7:14 AM No comments:

I try to take note of a fun English phrase every day. Here are some gems from this week:

Sign at our welcome buffet for the cast on the first day said the meat was "lamp".

Bulletin board on the side of the road has cartoon children smiling. Underneath in huge lettering it says: Don't Do Drugs. Don't Drag Race.

I was standing with one of our contacts from Taipei watching the cast perform a mini-show. He turned to me with huge excitement in his voice and said "This group is so high! All your students, so high!" I'm interpreting that to mean high on life.
Posted by Scott & Ellen Enebo at 6:56 AM No comments:

Scott & Ellen Enebo
Lovers of life, adventure, good food, and each other... and currently road staff for Up with People's Cast B 2008